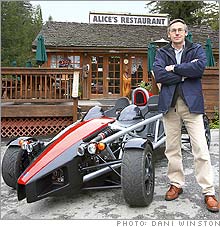 I’ve always been a big fan of alternative energy vehicles, so this car is really exciting for me.  It blows away a Ferrari 360 Spider and a Porsche Carrera GT in drag races, and its 0-to-60 acceleration time ranks it among the fastest production autos in the world.

The only car it didn’t beat was a Bugatti Veyron.  Granted, it’s $100,000, but when people start making stuff like this, cheaper, more sensible stuff is often close behind.