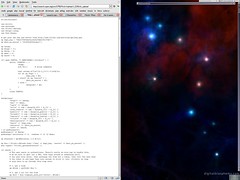 For some time now I’ve had a 3 line bash script that would take a screenshot of my desktop and upload it to my web host.  Then it would be displayed in my sidebox titled "Current Desktop".

I always wanted some kind of archive, but was too lazy to code it.  Today it occured to me that I should make it upload to Flickr, and they’d archive for me.   I’ll post about the code for it later, but in the meantime, you’ll note that the sidebox has a slightly smaller thumbnail that it used to, but it has an RSS feed now, and you can go look at past shots.

I typically take a shot a couple times a week, just for fun.  I’ll make sure to do a code post, because I used a cpan module that can do a LOT of flickr stuff, and people might find it useful.