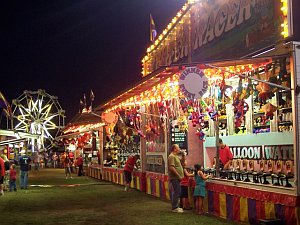 Wednesday night we went to the Manistee County Fair, and had an absolute blast. Last year I blogged about our experience there, and this year was every bit as fabulous. The girls are both bigger now of course, but there’s that magic line that lets you into so much more at the fair.

We were going to go up Thursday evening, but storms were forecast every night that week, and Wednesday looked like it was going to clear up. We put out the message and took off. We told Sophi we were going because it wasn’t going to rain and she said “But I want it to rain!”. We asked why, and she said “Because I want to get a wet bottom on the Scooby Ride!” Apparently last year she sat in a puddle (it was raining last year) and that was enormous fun. 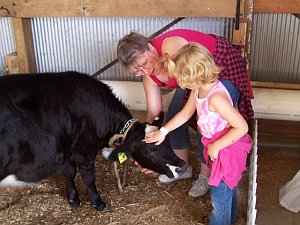 As with last year, we hit the barns first, since the rides were less hot once it got darker. 4-H is very big in northern Michigan, and there are always lots of animals being shown and auctioned off. The picture there to the right is of a calf named Daisy. My mother-in-law knows the girl that raised her. The calf was auctioned off at $3.45/lb, and will be fattened until next spring. We saw the chickens, bunnies, and goats, all of which you can see pictures of on my gallery. 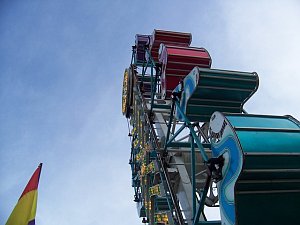 After the barns we started on the rides. This year they had The Zipper. I’ve ridden it before, and it can be pretty fast and dizzying. Molly was so excited about it. She just couldn’t wait to get on there. I asked her if she was sure, and she said yes, so away we went. The guy running it made her stand by the height bar, and she made it, so we climbed in.

As the ride started and we began to get high up in the air, Molly got a slightly worried look on her face. The ride stopped with a jerk to allow more people on down below and we began to swing. “Daddy, I don’t think I like this” she said. “I told her they couldn’t stop it just for us, and that I would take care of her. The ride started in earnest and we really started to swing and she made the same sound she makes when there’s a spider on her, or I try to lift her above my head. Then we got to the top of the ride with just the right spin and flipped upside down 3 times in a row.

“DADDY I DON’T WANT TO DO THIS ANYMORE!” I felt so bad for her. She hated it with every bone in her body. I was big enough to be held firmly in place, but she was small enough that she slid up and down when we spun. I put my arm across her to try to hold her more securely, but I couldn’t completely stop it. She never actually cried, but I think that was only because she was concentrating so much on Not Dying. 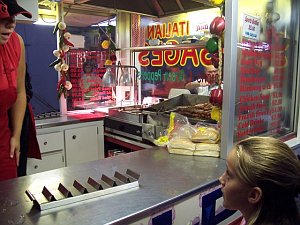 Aside from that, everything at the fair was perfect. I had an italian sausage with mustard, some cotton candy, a powdered doughnut, an elephant ear, and some fresh-squeezed lemonade. Most of that in one sitting. 🙂 Sophi had a green Sno-Cone, and Molly ate almost a whole bag of cotton candy.

The Manistee County Fair fits almost every stereotype of the small county fair; hyper kids running like mad from ride to ride, every unhealthy but delicious food you can think of, smash-up derbys, ugly people in spandex, rides that can miraculously fold down into a semi-trailer, and shady games of “skill”.

We had a glorious time.

I have a photo gallery here but I’m going to show a few shots below here, with comment. 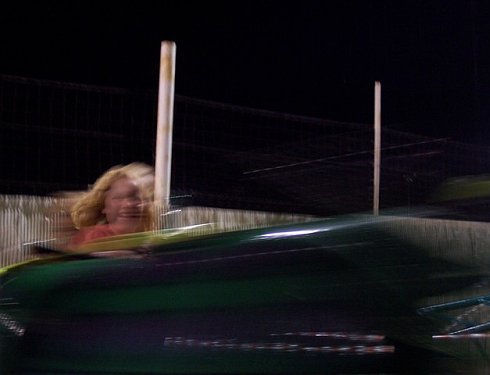 This picture just about sums up the evening. Non-stop motion, with complete joy. 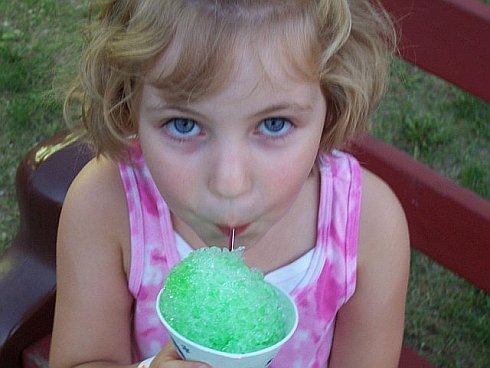 I just love this shot. Those blue eyes just grab me. She had her heart set on a Green Sno-Cone a week before we got there. Dreams realized. 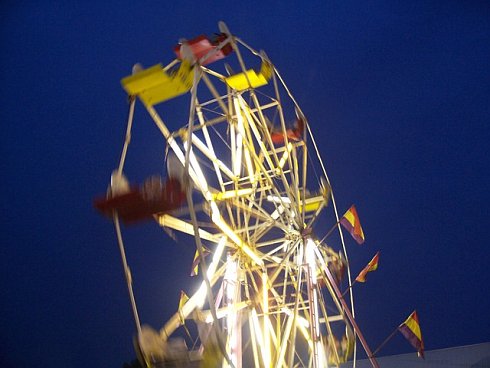 The Ferris Wheel is the quintessential ride for all fairs. The first one was engineered by Mr. Ferris in 1893, and could carry 2,160 people at once. I love the way this one lights up the sky.