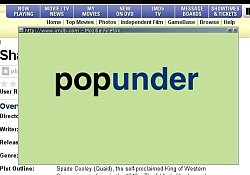 Once upon a time a cool guy made IMDb.com. It had tons of cool info, it was organized well, and there wasn’t a lot of trash.

Then Amazon bought it. Suddenly pop-ups, pop-unders, and pop-stupids abounded. But Firefox is cool! It blocked them. For a short time in the early days of Firefox the Amazon Evil Ones (except my friends who work there) worked hard to get around it, and new versions would kill it again. Then it seemed they gave up for a while, or else they just couldn’t get it done.

Today I saw evidence that they’re still working hard at annoying their users. I got a pop-up that came through Firefox’s blocker, but I don’t think it accomplished what they wanted. Unless they really DO want nothing more than to drive their users away.