Yesterday we saw a TV commercial where a grown man was in his front yard in his bathrobe, with a rag around his head and a toy light saber in his hand, doing really bad mock sword fighting.  His neighbor was looking at him really wierd, and I could tell my wife thought he was pretty pathetic.

Then the camera zoomed out, and there was a little boy doing the exact same thing.  Fade to black, and it says "It takes a man to be a Dad."  My wife said "That’s really cool".

It affirmed something I’ve thought many times, and a decision I’ve made.  I have two little girls who love me like crazy.  They call me their King Daddy (because they’re the princesses), and I can Do No Wrong.  I could dress like the Bride of Frankenstein and walk through the mall shouting "I’m so COOL!", and they’d have a blast with it, because it’s silly. 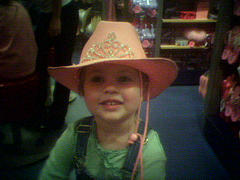 I’ve been asked to do some things that I would not do if I weren’t a Daddy, and you wil be too if you are one.  Younkers has a small section devoted to All Things Princess.  They sell things, but they also have girls to provide free hair glitter, and temporary make-up, and po-nailish.  It’s usually quite full of 5-10 year old girls in various states of princessness, and their associated parents trying to keep up.  It is NOT a Man Place.

I’ve been in there several times, and I intend to go again; yea verily, I look forward to it.  Why?  Because my little girls think it’s heaven, and there’s not much in the whole world that could embarrass me enough to keep me from taking them.  I’m sure there are people who think I’m weird for going there.  I’ve been known to wear the occasional tiara (it’s the closest thing they have to a crown to give me), and it feels a little silly, but I do it because it makes my kids happy, and I couldn’t care less what anyone else thinks.

It takes a man to be a Dad because you WILL be asked to swallow your pride and do embarrassing things.  It takes a real man to be able to do that, and be what your children need regardless of the cost to your image.