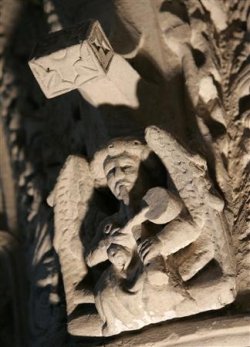 Cymatics is the study of the physical manifestation of sound waves. I’m sure you’ve seen the rings that form in the top of a glass of water if it’s tapped. If there’s matter in that water, the mater will also form patterns, and it’s not always rings.

There’s a chapel in Scotland called the Rosslyn Chapel. It was apparently featured in The Da Vinci Code which I never saw. In the ceiling are sculptures of musician angels with boxes over their heads. For 500 years no-one has known that the boxes were for.

Almost thirty years ago a musician set out to solve the riddle. After much study he realized that the patterns on the boxes resemble patterns that sand make on a sheet when sound waves are applied at just the right pitch.

After much experimentation, he came up with the various pitches that were there, and managed to make them into a song. After that, they discovered that a larger angel in the chapel was actually holding a carving of a musical staff, with its fingers on specific bars. The music found by Our Hero matched the starting notes provided by the staff angel.

There’s a GREAT video about it, it makes a lot more sense after watching it. Here are links.