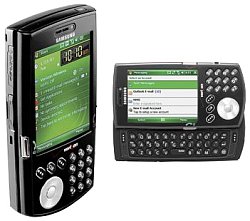 For the past two years I’ve had an AudioVox XV6700 cell phone. It’s a Smart Phone, running Windows Mobile 5. My new-every-two phone swap time came last week, and I found that Verizon is currently only offering 2 Smart Phones with wifi built in, the XV6800 and the SCH-i760. I got the i760, and I’ll be offering thoughts on both the phone itself and Windows Mobile 6.

The i760 comes with two batteries, a thin one that fits flush with the rest of the case, and a thicker one for longer term use. The i760 is thinner than the xv6700 even with the thicker battery in.

The stylus goes into the right side of the phone, just below the screen, at a 90 degree angle. To get the length needed for a real stylus, it telescopes. This works fairly well, but it’s still a little short. I’m sure I’ll get used to it though.

With the xv6700, when you turned the camera flash on, it came on like a flashlight, always on. This was handy for using it as a flashlight. The i760 doesn’t do this, but it doesn’t bother me.

The i760 has hardware buttons on the front for dialing. The xv6700 was practically un-dial-able with your finger. The i760’s number pad is small and on the right side of the phone, so it’s very easy to use for someone right handed. The phone is narrow enough that a left hander could use it as well.

The “answer” and “hang up” buttons are on the left and right sides of the phone, respectively. There’s good and bad in this. It puts the end button right under my thumb when I’m talking. I’ve hung up on someone once (hi Drew!), but for the most part I like how easy it is to hang up when I’m done. The answer button does make me partly slide the phone open though. The only real problem with this is that it makes it feel like I’m going to drop it. I suspect I’ll get used to that and it won’t be a problem.

It uses MicroSD for its expandable memory. That means I couldn’t use the MiniSD I had for the xv6700. That means whomever inherits my xv6700 will get a nice card with some cartoons on it. I’m amazed at how small and light 2G of memory is these days.

The speaker is amazing. With the xv7600 I could only really hear people clearly if I was in a quiet room. Even the car made it hard to hear someone. With the i760 I have to turn the volume down to 25% so I don’t lose my ear. If you’re in a call and want speakerphone, you simply hit the green button again and you’re there, and it’s LOUD. Whistling down the road the whole family can hear who’s on the other end. If I play an mp3, 50% volume is comfortable with it sitting on the desk next to me. I haven’t tried it yet with headphones, since it didn’t come with any and uses that stupid half sized jack, like every other phone.

The screen is about the same size as the xv6700. It feels mushy, like there’s a flexible surface with goo under it. I noticed it right away when I got it, because the xv6700 had a hard screen, but I just realized I haven’t though about it since that first day. It causes no problems, just seems odd to me. Maybe it protects it or something.

I hate belt clips, and the xv6700 came with a cheap Naugahyde sleeve that protected the screen etc. I loved it, and it slid into my pocket nicely. There is no such critter for the i760. I tried the belt clip and still hated it. So for now it goes into my pocket with no screen protection. It’s not broken yet.

I like the keyboard better than the one on the xv6700, though it’s different and will require some getting used to. The biggest negative change is the lack of a tab button. They removed the arrow keys, but the thumb circle on the face works fine for that. I haven’t figured out a good way to tab through form fields though. There’s still no escape key, but I found a solution which you can read about in the software section below.

The xv6700 used a standard mini-usb plug for charging and syncing. That was really handy, because I could use any mini-usb cable for charging. The i760 uses something proprietary, and it’s a pain. It doesn’t charge when plugged into USB, so I have to plug it into the wall every night. That was really disappointing.

On the whole, I’m very pleased with the hardware for the i760. It’s solid.

The xv6700 used Windows Mobile 5, and the i760 uses Windows Mobile 6, so I won’t be doing comparisons of the phone, but rather OS improvements. I assume the xv6800 uses 6 as well, and would probably be very similar to the i760.

The very first thing I noticed that I like on the i760 is the clock. It’s about 5 times bigger than my old one. I don’t know if this is a WM6 thing, or simply an application Samsung built for this phone. But it’s wonderful, I can read it from 6 feet away.

There’s an option now to put wifi/bluetooth/cell signal controls on the Today screen. That means you can just hit it and turn the various signals on and off. It doesn’t do it right there though, it takes you to another screen. Since you can get the same result by hitting the signal meter in the toolbar, I’m not sure what the benefit is.

The on-screen controls for the camera are FAR cooler than the xv6700. I don’t know if that’s a WM6 thing, or a Samsung thing. But I can control whether I’m doing still photography or camcorder; single, mosaic, or multishot; image size (up to 1280×960); quality; white balance with 5 options; flash; timer; and color effects, all from on-screen menus. There’s a full size example shot in good lighting under florescent lighting here.

WM6 comes with Mobile Office. I never use it, but I can’t remove it. Not only that, I can’t remove it from the Start Menu. This is a pain because there are a limited number of items allowed there, and I’m required to fill a slot with an app I never use.

Internet Explorer has been upgraded from 5 to 6, and seems to work well. I tried Opera Mobile and didn’t like it at all. It seems very odd for me to say I like IE best.

WM6 comes with the same games as WM5, Bubble Breaker and Solitare.

I mentioned above that the lack of an escape key was disturbing for me. I found a wonderful SSH client that blows away anything I’ve seen so far; mToken. I’ll do a full review later. It has an on-screen meta-keyboard with stuff like F keys, and escape button, and a “save this command for easy running later” feature. VERY slick.

The i760 is very much better than the xv6700. I can’t vouch for the xv6800, but I suspect I would feel the same, just for the hardware number pad. I really like it, and it with the ability to ssh to our web sites and edit them, I may lobby hard for EV-DO, so I can do it from anywhere.