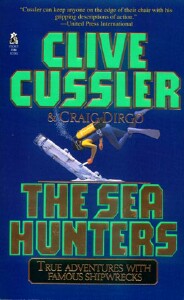 I’ve never read a Clive Cussler novel. I’ve thought about it, but I’ve never heard anyone say it’s great stuff, just kind of odd. But a few years back I spent some quality time in a hospital bed, and someone gave me Sea Hunters. As I’ve mentioned, I can’t leave a book alone if it’s within reach, so I checked it out.

I love this book.

Many of Cussler’s books are about a guy named Dirk Pitt, and his organization called NUMA (National Underwater and Marine Agency). Well, Cussler is just as interested in finding sea treasures as Dirk, though Cussler’s treasure is history. So he created a real non-profit called NUMA, which is primarily funded by Cussler’s book royalties. But he doesn’t just fund it, he’s actively on site for every search.

Each chapter covers a different recovery mission, and typically starts with a small dramatization of how the craft was lost. While Cussler’s novels are a bit odd, he does know how to string words together, and since he’s actually trying to be historically accurate, these are interesting.

Not all the chapters lead to success; in truth he mentions in the introduction that failures outstrip the successes. Despite that, his successes have been truly excellent. Some examples:

I should point out that the Locomotive Engine was not found but they were able to prove that it had been salvaged not too long after it went off the bridge.

Sea Hunters II recently came out, and I got it from the library yesterday. Watch this space dear reader, for a review!