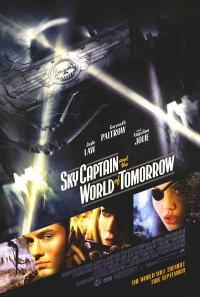 My wife took me to see this movie the other day. The previews looked great, and I hoped it would be good, and feared that it would suck. I was not disappointed.

I don’t remember if I’ve mentioned this before or not, but I really like old sci-fi, particularly when written between the World Wars. There was a sense of wild imagination then, when people were truly opening their minds to what could be. The science wasn’t torn apart to see if it could really happen or not, because that stuff was invented by scientists who thought deeper than you or I, and we don’t question them. If it’s in there, it’s in there.

In Sky Captain, giant robots are tearing the world apart, apparently for resources and equipment for something. Sky Captain is a pilot who has his own army, and is called in to save the world. He flys a heavily modified P-40 Warhawk, and apparently saw action with the FLying Tigers, though they’re never mentioned.

The filmography is deliberatly intended to make the movie look it was shot in the early days of film. It’s a color movie, but much of it appears sepia.

I can’t really tell much about the plot without giving everything away, but this movie holds true to everything I love about early sci-fi, from the look, the plot, the characters, giant robots with laser eyes, and flying aircraft carriers.

One thought on “Sky Captain And The World Of Tomorrow”