There are a lot of things I’ve been meaning to blog about lately, but there’s not much time left in the day for blogging these days. But here’s one.

Once upon a time in our world, cannon were not mass produced. They were made one at a time by a variety of different people. They took different size shot, and their quality was pretty much unknown until you shot them. 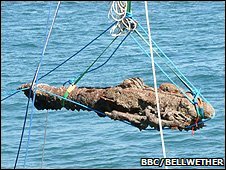 Remember when the English Navy beat the Spanish Armada, against all odds? As it turns out, they had a secret weapon. The recent discovery of a sunken ship from that time shines light on the cannon that the English Navy had at the time. They had just started making a high quality gun that shot standard size projectiles at a much higher velocity than any previous gun.

This new gun could hit a ship over a mile away, and at the normal fighting range of 100 yards could go right through a ship, punching 2 holes in the hull. This allowed the English Navy to stand off and pummel the Spanish Armada. Like shooting fish in a barrel.

The BBC Article here has video of a replica cannon being fired. It’s very cool.