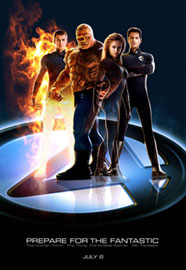 My friend John ended up with some preview tickets for The Fantastic Four for yesterday, and I weaseled them out of him.  I took my wife, and we stood in line for about 30 minutes before getting in, and then sat in the theatre for another 30.

As an aside, the only preview we got to see was for Transporter 2, which looks WAY better than I expected it would.

I don’t want to give away any spoilers, so this is going to be a little simplistic.  🙂

I never read any F4 comics as a kid, I never really read ANY comics as a kid, so it changes my perspective of a Marvel movie.  I thought this one was pretty good.  If this picture is any indication of what people will expect Our Heros to look like, they did an excellent job in casting.

There were some really excellent panoramic shots, I’m always a sucker for those.  The science was a little funny, but it’s set in the future, and they didn’t try to exlpain it.  As sci-fi goes, I’m cool with that.  A case in point is that they weren’t weightless in the space station.

The only time I could tell the CGI was CGI is in the close up shots of Mr. Fantastic’s hands.

Stan has his usual cameo, but this one is a LOT more visible than in Spiderman.  Unless you don’t know ANYTHING about him, you’ll know it immediately.

All in all, it was a good movie.  I don’t think it’ll ever be as big as Spiderman, but then, the F4 were never as popular as Spiderman, were they?

2 thoughts on “The Fantastic Four”