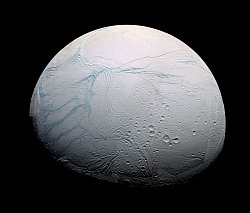 The Cassini probe has been checking out Saturn, its moons, and its rings for quite some time now.  It recently began looking at a very small moon (about the size of the UK) named Enceladus.

Now, every planet we’ve ever looked at has had an equator and 2 poles, with the equator being warmest, and the poles being coldest.  This has also held true for moons, but the moons have to be big to hold an atmosphere in its gravitational field.

Enceladus is small enough that it should’t have any atmosphere at all, but as the Cassini probe got closer, it started noticing debris.  Dirt and water specifically.  Very odd.  Then it noticed that it had a hot spot.  At the south pole.  Curiouser and curiouser. Then we saw pretty blue stripes all over the surface, and saw that they were cracks.

The long and short of it is, it looks like the center is full of water, and there’s a hole in the bottom, and it’s jetting it out into space.  It’s not technically a volcano, since it’s not due to pressures inside from heat and compression, it just as water inside, and not enough gravity to keep it inside.

The cracks and colors are relatively young, and I don’t just mean in astronomical terms, but possibly as young as 10 years.

Most of that stuff they’ve just realized in the last couple weeks as Cassini has gotten close enough for a good look.  It’s a very exciting time for Saturn studiers.

For more info, you can check out these articles:

One thought on “Wild and whacky Enceladus”