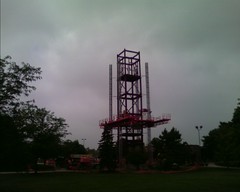 Cornerstone’s campus is getting a clock tower this summer, and they’ve been working on it for a couple months now.  They erected the super-structure about a month ago, and now they’re putting the surface supports on the outside.  In order to get that done, to built this thing you see to the right.  Click it for a larger version.

About 6 feet from each corner they erected a small vertical structure.  You can see them in the picture on the right and left of the tower.  They’re not in the ground, they’re set on boards with a base that can rotate like an ankle.  Then they’re connected to the tower by struts.

Then there’s a scaffolding system that goes all the way around, and can go up and down on those struts like an elevator.  You can see in the picture that it’s not just a narrow walkway around the tower either, there are some arms where you can walk out a ways from the tower.  It’s brilliant, but it does not look strong enough.  That scaffolding must weigh several tons.