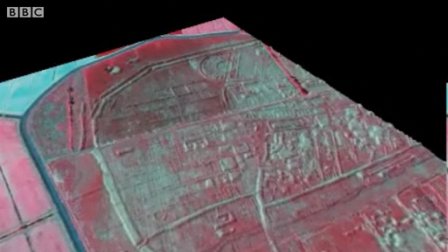 Before today I’d never heard of Altinum, but the BBC just did an article on its discovery. It’s one of the very few major Roman cities that was not built on top of in later years. It’s long been lost, but some aerial photos helped.

[The 3d video flyover] was assembled using visible and near-infrared aerial photographs of the farmlands that currently cover the region, along with a computer model of the local terrain.

The photos were taken during a severe drought in 2007, which made it possible to pick up the presence of stones, bricks and other solid structures beneath the surface.

The full article is here, and the video from which I took that screenshot is quite impressive.