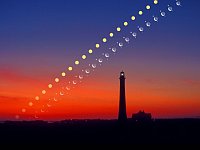 The  Astronomy Picture of the Day is a small website run by two guys at universities.  The entire site is static html, so they actually create a new page every day by hand (probably a bunch at once, but still) and post an astronomy picture every day.  They accept photos from anyplace that has lisence to give them, so they get lots of shots from high-end amateurs, which is actually quite cool.

The picture shown here is for today, and is very very cool.  I won’t tell you all about it, since you can go read it for yourself.  As you can see though, they’re not all "space" shots, they’re just astronomy shots.  May 1 is pretty cool too.

They don’t have their own RSS feed, but Jaime Zawinski made one with his cheesgrater.

One thought on “Astronomy Picture of the Day”