For the last couple months I’ve been following the MODIS rss feed. MODIS takes pictures of Earth. It doesn’t grab me as often as some of the other feeds, but every now and again they grab something really cool. 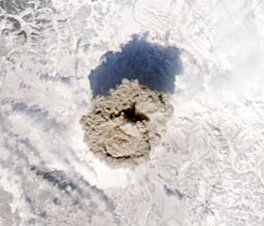 To the right here is a picture the Shiveluch Volcano on the Kamchatka Peninsula. That’s on the eastern shore of Siberia, across the Bering Sea from Alaska. There’s a bigger picture here. There’s also an excellent description of the picture, the volcano, and some other stuff.