I remember a time when most people browsed the web using a text based browser.  They used their arrow keys to move from link to link, / to search, and a variety of letters to send commands.  When graphical web browsers started to become popular developers started to push the envelope of what could be done.  When images became possible, people made their site headers be images, and they were beautiful.  But the question remained “How does it look in Lynx?”.  Because if it didn’t work in the most commonly used browser, what good was it?

My how times have changed.  Now we use a different browser name when we ask that question.

In the summer of 1995 I got my first paid web job.  I was paid to build a web site for the college I was attending, Cornerstone College.  At the time the college had a VAX VMS system for campus computing, and its internet tools consisted of email, gopher, telnet, and lynx.  We used the EVE editor for everything except Word Processing.

Since Lynx was the most commonly used browser at the time, AND that’s what I had available, it made perfect sense that the site would be built for that browser.  It didn’t look too bad in a graphical browser either of course.  Here’s a screenshot of the the first Cornerstone web site: 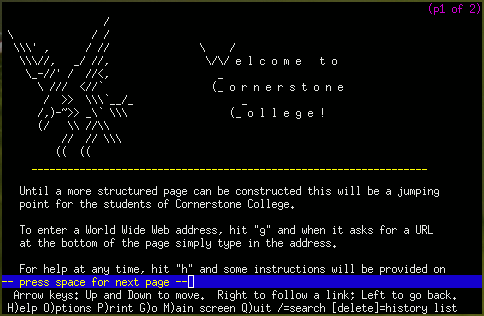 Sometimes I miss those days when everything was so much simpler.  Entire new technologies could be learned in a matter of days.  Servers were open to anonymous public logins because everyone trusted everyone.

5 thoughts on “Developing for Lynx”