NOTE: This post is pretty much ripped off verbatim from Matt McDougall’s post here.  He said it as well as I ever could.  Thanks Matt! 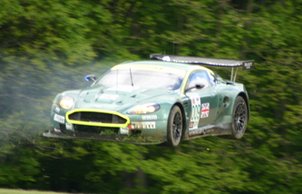 This past weekend an Aston Martin DBR9 racecar was doing practice laps at the Mid-Ohio Raceway when it left the track, went airborne, and "flew"142 feet before returning the terra firma.

By contrast, the first record of powered flight by the Wright brothers on December 17th, 1903 lasted for 120 feet and 12 seconds.

Sure, it was a crash, and sure, it means the driver messed up and whatnot, but he also has one hell of a cool story to tell the grandkids.  I mean, it’s not every day that you launch a car twenty-two feet beyond the distance covered by the first recorded flight.