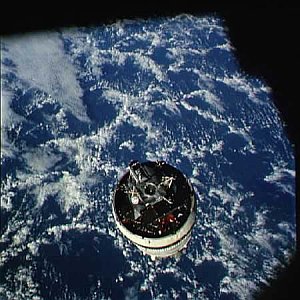 NASA took lots and lots of video during the days of the Apollo missions to the moon, much of it from the orbiters and landers. That footage has been sitting in cans in storage just about ever since, just waiting for something to destroy them.

Recently, Johnson Space Center and Arizona State University’s Space Exploration Resources have begun scanning and creating an online digital archive of all the original Apollo flight films. It’s not video, it’s still scans of the the video. Some of it they even put into cool flash widgets so you can zoom like crazy.