About a year ago I thought I should do a blog post about conservation, but didn’t. Since then I’ve thought about 30 posts, and didn’t do them, because I hadn’t done the first. So finally, here’s the first, and the others will follow. I even made a new category, Going Green.

I’ve always been interested in energy conservation and recycling. When we lived without electricity my dad always dreamed of having a windmill, but it never worked out. I was never very good at doing something about it though. My wife and I have gradually worked into a greener lifestyle over the last couple years though, and I think that’s better than a giant leap.

One of the first things we did wasn’t with the intention of saving energy. Several years ago our fridge broke. It came with the house, and was kind of old. It didn’t completely break, it just couldn’t keep things very cold. It kept them about 65 degrees, which is a lot colder than the air outside in August, but not really what milk needs. 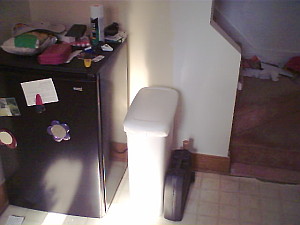 We didn’t really have the money for a new one, so we started looking at small fridges. We found one at Sears that’s about 3 feet tall, and doesn’t have a freezer inside. My in-laws gave us an upright freezer that’s about the same size, and that lives in the basement. We kind of thought that we’d get a bigger one later when we could afford it, but we’ve not needed a bigger one, and we still have it years later.

Last year a friend of mine was telling me about the steps he was taking to reduce electricity consumption in his house. His goal was to get his monthly bill below $100. That seemed odd to me, so I checked our bill, and in August, with the air blasting, we paid $65. Last month (May 09) it was $35. We’ve done a couple things, like getting a few CFL bulbs etc, but nothing big. Then I remembered the fridge. My guess is that it saves us about $50 per month in electricity bills. We’ve had it 5 years now, so that’s about $3000.

Besides the fact that it’s saved us money, it’s NOT used that electricity, and NOT burned that coal.