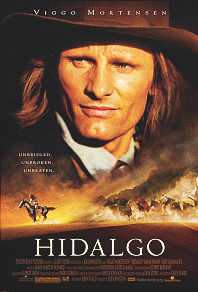 My wife took me out on a date the other night, and we went to see Hidalgo. The movie is based on some of the events in the life of Frank Hopkins, a man who did courier work for the U.S. Army at the end of the 1800’s. He had a great horse named Hidalgo that he’d captured himself in the wild, and when not working for the Army they ran long distance races.

After playnig a small part in a massacre of a small group of Indians, he became VERY depressed and joined Wild Bill’s show back east and tried to drink himself to death. An Arab sultan who owned “the fastest long distance horse in the world” heard about Hidalgo, and challenged him to enter the world’s most difficult cross country race, 3,000 miles across the Arabian desert. No-one thought they could win of course, but Frank was depressed enough that he didn’t care if he won or not, so they went.

Frank Hopkins is played by Viggo Mortenson, and I think it’s a testament to Viggo’s acting skill that I didn’t think of Aragorn once during the whole movie. They did a very good job of showing a VERY long race without getting redundant in their scenes. They also did a pretty good job of showing both Arab/Islamic culture along with the practicality of life that many Arabs had/have.

All in all I thought it was a good movie. Plenty of action, a western flavor with a unique twist.