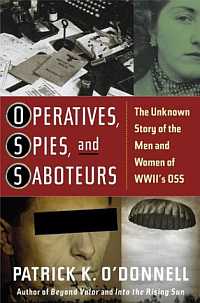 Chris Lemke at WCSG was sent a copy of this book by the publisher for review for some reason, and since he’s blind, I asked if I could read it. He graciously acquiesced, and I dug in.

The book claims to be the only book to ever reveal secrets about the OSS, but I’ve read several in my time, including the excellent Secrets and Spies. I found it to be not quite as readable as SaS, partly because SaS is a Reader’s Digest Condensed book, and is therefore mushed into intellectual baby food. On the other hand, OSS is a little more disjointed, moving from personal story to personal story, with a timeline being the only thing that joins them together.

In the writing of this book, Patrick K. O’Donnell utilized the Freedom Of Information Act to dig up quite a few things that were unavailable to the public until recently. Very few of those things were interesting in and of themselves, but he also found lots of names and code names, and was able to look up quite a few people and get first-hand accounts of their training and exploits. This included not just Americans, but Poles, Slovaks, Czechs, Italians, and Germans, many of whom only barely made it out of the war zone with their lives.

If I had to advise whether not to buy this book, I’d say get it from the library. It’s worth reading for the personal experience factor, but I didn’t really learn anything new about The War, and I don’t even consider myself an expert, so it’s not hard for me to learn new things.

Come to think of it, I did learn about the different factions in various European countries that didn’t like either the US nor Germany. The Communist Party had a large contingency in France, and near the end of the War, quite a few Allies of the US found themselves being attacked by the Communist French. There was also a civil war of sorts going on in Slovakia, and different US leaders favored the different “leaders” of the country, and would sometimes send arms to one side, and sometimes the other side, and hope they used them on the Germans and not each other.

If you wish to, you may buy this book here