So the final version of Internet Explorer 7 is available today.  I’ve been watching the betas, wondering if they were going to fix any of the user interface gaffs, and was rewarded with no fixes at all. 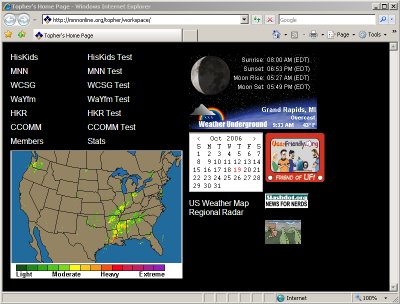 First, the good stuff.  It can render pngs properly now, which is a good thing.  It makes my blog look a lot nicer.  It also handles css better, though still not quite properly.  Due to the number of "IE fixes" out there, Firefox should render more pages properly than IE7 at this point.  On the backend, it does a much better job of keeping the Bad Guys out of your machine.

Most of my issues with IE7 stem from its interface.  If you click the image above you can see a larger version of it.  The forward and back buttons are in a completely different location from Stop and Reload, which are in still yet a difefrent location than Home.

It can handle tabbed browsing now, but the button to make a new tab is quite well disguised.  It’s the small, unlabelled grey tab to the right of the bigger tab.  You also can’t get rid of the tab bar if there’s a single tab.

And my biggest pet peeve about IE is still there.  There’s a scroll bar on the right, ALWAYS, whether you need it or not.  That’s a huge pain in the butt for me as a developer.

On the whole, Firefox is still a wildly better browser.

Oh, one more thing.  I’ve been informed that IE7 is being pushed out to ALL Windows XP SP2 machines via auto-update today, so you’ll probably have this browser sooner than you might think.

UPDATE:  It has been pointed out to me that the first critial security flaw in IE7 was found less than 24 hours after release.  Did I mention Firefox?