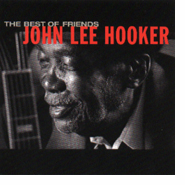 I love the blues, but I’ve never had a great grasp of exactly WHO I like, or why. I think I’ve come to the realization that I like John Lee Hooker, and anyone that sounds like HIM.

Before this album all I really comprehended about him was that I liked his 30 seconds in The Blues Brothers, and that I’d probably like his other stuff. I saw The Best Of Friends at the library the other day and grabbed it, not quite realizing what a treasure it would be.

This album is called The Best Of Friends because he does duets with his friends, and his friends happen to be excellent musicians. Here’s the song list:

The album is everything I’d hoped it would be. Great vocals, great instrumentation, great variety, everything. If you love the blues, I highly recommend this album.

2 thoughts on “John Lee Hooker, The Best Of Friends”