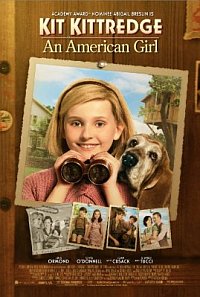 Last week we took the girls to see Kit Kittredge: An American Girl. I anticipated it being about the whacky adventures of a young girl in the early 20th century America, filled with the joy and simplicity of youth. It wasn’t about that.

The movie is set in the mid-1930’s, the height of the depression. People are losing their jobs, their homes, and their families. These days when I think about losing a home I think “take all your stuff and move to an apartment”. In the movie the men just showed up and started taking everything. Men would leave town to go to Chicago or New York to look for work. Some didn’t come back, either because they couldn’t face their failure, or just died. One of Kit’s friends is the daughter of the banker, and Kit doesn’t really understand why her friend’s Daddy is hurting all her other friend’s Daddys.

The core of the story is that there’s a crime wave, and it’s being blamed on “the hobos”. There are thousands of people on the move, living hand to mouth, and the people who are doing ok look down on them as losers, because they couldn’t make it. Kit gets to know some of the hobos, and finds out that they’re just like her family, and her Daddy, and her friend’s families.

The movie is very much about class distinction, and about how many people on the high end are just a heartbeat away from being on the other end, whether by their own choice, or the happenings of life. It was hard for me as a Dad to watch men who loved their families very much not be able to care for them, or have to leave.

On the lighter side, the cast was fantastic. I love Stanley Tucci, and Joan Cusack was great as well. Everyone was just perfect for it.

All in all it was a very good movie. Not at all the fluff I expected, though it was fun for the girls too. We had some really great talks with the girls afterwords about money, family, and judging.