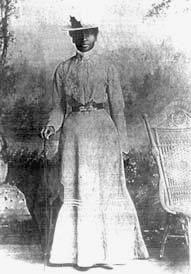 Mary Bowser was born a slave in the South before the U.S. Civil War. Her owner traded all her family members away when she was quite young. Her owner’s daughter, Elizabeth Van Lew (a hero in her own right) later bought back all of Bowser’s family and freed them. Mary went on to college in Philadelphia.

During the Civil War, Van Lew arranged for Bowser to become employed by Jefferson Davis’ wife, serving in the southern White House in Richmond. Household slaves and servants were taught to be unobtrusive and no-one thought about whether she could read. This gave her the perfect opportunity to read everything on Davis’ desk about troop movements, supply trains, etc. Her flawless memory enabled her to repeat hundreds of details later to Northern spies.

Near the end of the War she fled. It’s believed she was suspected, but we don’t know. She tried to burn the house down, but failed. No-one ever saw or heard from her again. She kept a diary, but it was accidentally thrown away by her family in the mid-20th century.

In 1995 Bowser was admitted to the Military Intelligence Hall of Fame.