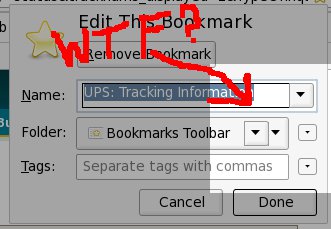 In Firefox, you can bookmark a page by pushing the little star in the right end of your location bar. *poof* it’s bookmarked. If you push it again, a little options window comes up, like the one in the image on the right. And there are drop down menus. So… many… menus…

One of them does nothing at all, unless there’s a Live Bookmark, which 99% of the time there isn’t. Two of them open the exact same menu. One of them opens a larger text area which you cannot write in, or do anything in at all.

I love Firefox, I really do. I think it’s magnificent, and I hold it in reverence. But that bookmarks thing is a wreck.

Update: I talked to a Mozilla support guy and he helped me figure out that some of the issues are due to an extension I have. We also realized though that some of them are due to poor UX design when there’s zero data in some bookmarks fields. So we all win!

Update2: We figured out that the extra menu is coming from Fotofox (which is an awesome extension) and the extension owner has been made aware. And I’m buying him a beer as soon as he comes here from Slovenia. Thanks Brian! (and David).