In 1965, Robin Lee Graham set out to sail around the world solo at the age of 16 years, 4 and a half months. He eventually accomplished that goal, becoming the youngest person to ever accomplish that feat. 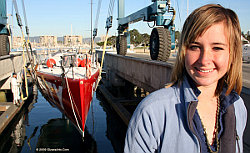 Robin wrote a book called Dove, named after his boat, and there was a movie made as well. I loved the book when I was a kid, and I always wished I’d been around to kind of follow along. There wasn’t any media coverage at the time though, so it probably wouldn’t have been noticed. Abby’s making a bit of an event out of it however, and I think that’s cool. I’m excited to watch her progress.

The world a pretty different place now than it was in 1965. Abby has a cell phone, and periodic internet access. We have GPS now, and food is stored a lot more easily. One of my favorite parts of her site is her google map which shows where she is each day. Right now she’s “Just East of Guadalupe Island, Mexico Day 4 – 1/26/2010”.

I’ll be following along and praying for her, the open ocean is a pretty scary place for a 16 year old girl. She seems to be a very accomplished sailor, but there’s a lot more out there than open water and weather.

2 thoughts on “Sailing around the world”