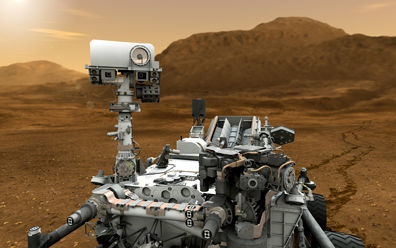 I’ve been paying attention to NASA for a long time, watching shuttle launches, probes to Jupiter and Saturn, the Mars rovers, etc. With the Curiosity Rover the marketing was noticably different.

The first thing that surprised me was that it was on the jumbo-tron in Times Square. Please follow that link for a sec and look at those people. Now look back here. Now you’re on my blog again. That’s Everyman, watching something incredibly momentous in human history. Everyone saw that. Everyone watched with bated breath to see if it would work.

The next thing was almost an accident. This is the stereotype of what NASA looks like. NASA Guy is what we have now. NASA isn’t old guys in white shirts with black ties anymore. It’s young hip rock stars sending awesome things into space.

The next thing is very obviously deliberate, and quite awesome. The Rover has a twitter feed, and tweets at least daily, if not more often. It tweets about the pictures it just took, and what they mean, just like anyone else on twitter. It tweets about where to find more info, and what’s going on. It’s easy to understand, it’s approachable, and doesn’t ask anyone to do anything new or out of the ordinary to keep up. That’s brilliant.

Yesterday the Rover became the first “person” to check into Foursquare on Mars. It’s obviously unlikely that anyone is going to unseat His Presidency, there are other plans afoot:

Since fellow foursquare users will have a hard time checking in on the Red Planet themselves, they’ll instead be able to earn a Curiosity-themed badge for visiting locations relating to science, technology, engineering and mathematics. The badge will be available later this year and is designed to spark the scientific curiosity of foursquare users by encouraging them to visit science centers, laboratories and museums. — gizmag.com

That’s absolutely brilliant. Leveraging services people already use to spread awareness of your Thing is exactly what this kind of thing is good for.