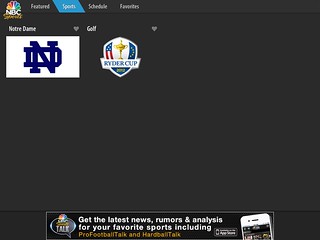 During the Olympics, NBC had a really excellent app for the iPad that let you watch video of all the events. My daughter loved it.

After the Olympics it showed the gold medal performances of all the events. My youngest and I watched some every night for about a week before she got tired of it. The app was great.

Several weeks after the Olympics ended they announced that the app would be re-purposed to be a general sports app for NBC. I had great hopes of being able to watch some more obscure sports as well as the mainstream stuff on TV.

When I finally did the update and went to sports they had just one sport. Last week they added a second. The second sport was “The Ryder Cup”. The first sport, which stood alone for months was “Notre Dame”.

I don’t know about you, but I never played Notre Dame as a kid.

One thought on “Is your favorite sport Notre Dame?”