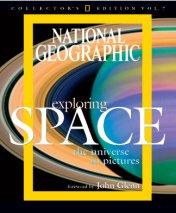 9 days after I was born, the astronauts of Apollo 15 landed on the moon and drove the rover over 18 miles. My first favorite toy was a yellow squeaky astronaut, and I can remember at age 3 looking at the moon and thinking "I need to go there someday".

I kind of forgot my leanings toward space until 8th grade, when we got to the space section of our general science book. Everyone else moved on after a couple weeks, but I never did. I poured over the star maps, and learned the names and locations of dozens of stars, galaxies, contellations, moons, and the planets.

I bought books, learned about red shift, and followed up on recent studies of gravity, dwarf stars and black holes. Then in 10th grade my dad bought me a telescope. I’ll never forget seeing Jupiter’s Red Spot for the first time. I didn’t see Saturn’s rings until college, and that was a total accident. I had friends over, and they wanted to look at something, so I picked something bright and pointed it at it. There were the rings. It wasn’t even that tough a telescope. You can see Jupiter’s moons with a decent pair of binoculars.

So the other day I was at the bookstore, and noticed number 7 in National Geographics Collector’s Edition series, Exploring Space, and I had to get it. It has a bunch of history, giving a pretty good timeline of human space travel, as well as some amazing pictures. It has the obligatory Hubble pictures, most of which I’ve already seen, but it has some cool rare stuff, like the photos of the surface of Venus from the Russian’s Venus lander. Also a great shot of some cosmonauts peeing on their bus before takeoff (Gagarin did it in a pinch and it became tradition).

If you like astronomy, it’s a great little book, and it was only $10.