I found an article that made quick reference to a part of another article that had just a line or two about something that might have happened once. Got that? 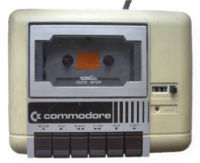 This woot post referenced a wikipedia article about some radio stations in Poland and the Netherlands transmitting computer programs over radio. Then people would record them with their cassette recorders and then play them back to their computers and then they could run the programs. I actually played quite a few games in the 80’s on a TRS 80 with a cassette drive.