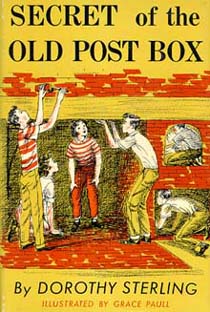 I love the smell of old books.  When I was a kid I read everything in the junior/teen section in our small town library, and most of it was kind of old.  Cracking open a book that hadn’t been read in decades was always exciting for me.

I don’t know where I got this book.  It’s just always been there on the bookshelf at my folks.  I think I read it for the first time when I was about 13, which is slightly older than the target audience, but I loved it.  There’s very little on the Internet about this book, and it’s even hard to find apparently, so I’m going to go all out in describing it to you.

The book is set in the mid-1950’s, and Pat, our heroine, has just moved from New York City to Haven, the small town her father grew up in.  There’s a spooky old house set back from the road behind her house, and she learns that it’s owned by a family who lives just down the road.  They can’t afford the taxes on it, so it’s going to be sold at auction.

The house is Revolutionary War era, and the builder (Nathaniel Woodruff) was reputed to have done great things in The War, but no-one really knows what.  A local  history student comments that it looks like he was a Tory spy, and the three boys whose mom owns the house take great offense.  They’re direct descendents of Nathaniel Woodruff, and have always thought of him as a hero.  But the records show he talked to the British a LOT during the war.

Thye history student tells them of a letter he found at the library to Mrs. Woodruff about telling their son "the truth", and that the papers are in "the post box", and she needs to be careful not to burn her hands.  As it turns out, Mrs. Woodruff died the day before the letter was written, so the post box is probably still hidden in the house.  Thus begins the search.

Revolutionary War history is deeply woven throughout this book.  The local kids know all about who was in charge during the war, what they did, and why.  Troop movements, encampment locations; it was all common knowledge for them, since it had happened right around where they lived.  They rode their bikes past those locations every day.  Since Pat, our heroine, isn’t from there, they have to explain everything to her, thus educated our Dear Reader.

To make a long story short, the kids DO find the post box, which takes us into the second reason I like this book so much.  The box is full of letters, all in code.  The author goes into great detail about the basics of coding.  I don’t say encryption here, since most of it is simple re-ordering of the alphabet.  There’s also a code that involves using a dictionary (also in the post box), as a key for a numerical code.

The kids break the code, and find out that Nathaniel Woodruff was the man in charge of George Washington’s secret service.  The letters are sold to a local Rich Man, who places them in the Local Museum, and enough money is obtained to save the house.

The whole book is set in the heat of summer, and they talk about cool lemonade, and swimming, and picnics while they struggle with codes etc.  Considering the weather we’ve been having lately (exactly the same), it suited my mood exactly.

I wish this book were more available, I think every kid should read it, both to spark interest in history as well as codes.  The best site I could find for it is here.  The author has a section in the back where she tells of a good book to read to learn more about codes and encryption, I’m going to see if I can find it.

My copy is in excellent condition.  If you know me, and want to read it, you may.