Today is the summer solstice in the Northern Hemisphere.  Down south I would imagine they call it the winter solstice.  🙂

This is the day when the Earth’s tilt allows the Sun’s light to reach the farthest north.  The north pole is seeing no night these days, and the south pole is getting no day.

So now begins summer in the Northern Hemisphere.  Something I find very ironic is that now our days are shortening, rather than lengthening, preparing for winter.  Something else ironic is that during summer in the Northern Hemisphere, Earth is at its farthest point from the sun.  It’s warm here because the angle of the Sun’s rays is much more direct, so we get more energy.

This means that the Southern Hemisphere gets a double whamy.  When it’s winter there, it’s ALSO farthest from the Sun, giving colder winters and warmer summers. 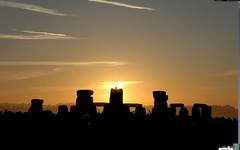 The image at the right is a picture of Stonehenge in England during the 2005 June Solstice.  It’s actually set as my desktop wallpaper at the moment.  It’s long been believed that Stonehenge was used for astronomical study and worship, so at astronomically significant times it’s a popular place to go.

So happy Summer Solstice, enjoy the ever-shorter days as we prepare for winter.  🙂