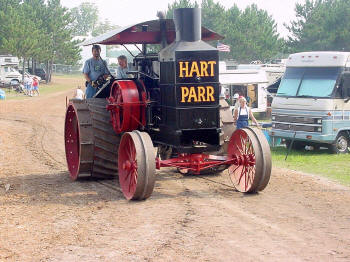 This last weekend I went to the old engine show in Buckley MI. It was mostly about tractors, but there were also a LOT of other engines and stuff. It was bigger than I thought it’d be. The lady on the train said the show maintainers owned 200 acres of land for just the show, and rented hundreds more for parking.

There were zillions of old tractors there. I kind of got a glazed look when I saw my 100th 1948 John Deere, but the exotic stuff intrigued me. John Deere sold an orchard package for their tractors that gave them a super futuristic look with fairings to keep the tree branches out. See picture link below.

The steam engines were REALLY cool. I quickly realized that they weren’t tractors. They were engines with wheels. The wheels weren’t so they could use the engine while it was in motion, they were there to move the engine from place to place. They’d use it at the saw mill for a month, and then drive it (1.5 mph) to another work site and use it there for a while, and so on.

There were also lots of non-mobile engines, large and small. Some ran the ice cream makers. 🙂

My girls walked almost the whole day. The only time I really carried Sophi was when the crowd was to intense to hang on to her. She fell asleep on my shoulder as we left, walking to the car. She stayed asleep for hours, through car transfers and everything. 🙂

I have pictures of the show here.