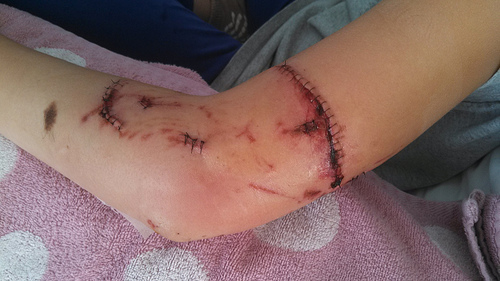 About 3 weeks ago my wife’s brother’s family got a new dog. He’s a rescue, and he’s a Bull Terrier. He stands a little higher than my knee, has a big head, and a skinny body. He’s very calm and sweet, and spends most of his time sleeping on the living room floor. I wrestled gently with him this last weekend and he did very well with it. He’s named Petey after the Little Rascal’s dog.

Sunday night the family came home at about 9pm, and everyone except my niece Faith went inside. Petey was sent out, and was playing nicely with Faith. Sophia went running out to play with them, and a few seconds later he had bitten her on the arm. I’m pretty sure he was startled, and probably was protecting Faith..

Sophia went running inside and my brother-in-law immediately called me to tell me he was taking her to the hospital. His voice was shaky and he felt absolutely terrible. I reassured him it wasn’t his fault.

There was a terrible ice storm going on at the time, so my wife and I couldn’t go up. We didn’t have a good idea of how bad it was, so we were talking about whether she needed to go to the hospital etc. He was pretty adamant that she needed to go, so away they went.

Sophia saw a doctor who called me and told me she was going to need to go to Traverse City for surgery. That was pretty scary. That was well after midnight, and they suggested she go home and sleep, and go for surgery in the morning, so that’s what they did.

Sophia didn’t really cry until she learned Uncle Jayson couldn’t go into surgery with her. Then she got a little teary. She came through it just fine though. They put in several dozen stitches.

She stayed for observation after she woke up, and then went back to the house. She stayed the time we’d planned on them being up there, and had a good time playing Wii with her cousins, etc. She went to visit Petey, and he pushed a paw out of his coop and she petted it.

My in-laws are looking at some places that take dogs like Petey. Dogs that have a pretty good heart, but need different care than a family can give. There are those that think he should be put down (and some that would have torn him to pieces if they’d been there), but we’d like to see him live in a good place.

She wore some bandages and a sling for the long ride home, and then I had to take them off her. It hurt like crazy and we both cried. When it’s not being touched it really doesn’t bother her that much though. I’ve been helping her straighen her arm and put it down to her side, and that hurts, but we can ease into it, it’s not excrutiating.

The doc that did the stitches is a plastic surgeon, and he said she should heal with just a little line, but it’ll be a while..

It looks like homeowners insurance is going to cover most of the costs, so we’re not wiped out by it. That’s a big blessing. Thanks for praying for us, we really appreciate it.

Now we have 2 crazy Christmas memories.

2 thoughts on “The Dog Bite”