This week Rod Martin has me down in Cincinatti to teach some guys from AiG the fundamentals of php.  I got to the Grand Rapids airport today, and was surprised to see lots of VERY big new machines for scanning my luggage.  I checked in, and had my boarding pass early because I’d printed it from the web.  I gave The Man my luggage and he put it into the machine and said "Ok, you’re all set".  I have no idea how he knew who I was, and I didn’t get a luggage tag.

All went well, and I landed safely in Kentucky.  I don’t think I’ve ever travelled so far from my gate to the luggage claim.  It was probably 3 miles, and involved a shuttle ride, 5 moving sidewalks, and 3 staircases.

When I got there, there was only about 15 people there, and there had been about 65 on my plane.  That made me a little nervous.  The little tracks weren’t running, and there were about 6 pieces of luggage going around that no-one was claiming.

I waited for about 40 minutes and then found the Delta help desk.  I talked to a nice old man who was obivously new to typing and computers, and we worked through getting a claim ticket.  He thought it was odd that I didn’t have a luggage claim ticket from Grand Rapids, which made me even more nervous. 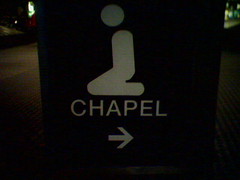 I went back out and took one more look for mine.  On the way I saw this picture on the right, and wondered if God was trying to tell me somehting.  There was a new batch in, and lots of people.  I saw a single, neatly folded tshirt coming around the track by itself, and thought, "that’s odd."  Then I saw a couple pair of underwear scattered behind it, and I thought "Man, it would suck to have your luggage blow open on one of these things".  Then I saw some socks, and thought "Those look like mine".  I looked at the shirt again and saw that sure enough, these were MY clothes going around.

I grabbed what I could, and a guy chucked some socks to me across the way, and then I didn’t see any more.  I found my bag going around, with the top open, but most everything still inside.

After that, things went ok.  I got my ride to the hotel and got a good meal and a soak in the warm-tub (hot tub seems like a strange thing to call this one).  This is probably the nicest Holiday Inn I’ve ever seen.  I didn’t know they even made them like this.  The wifi works GREAT in my room.  🙂

So, here I am for several days, we’ll see how it goes.