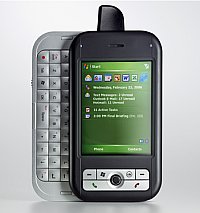 I got approval for a new cell phone in early May. It’s going to be a Verizon Wireless XV6700.  I’ve always thought that a phone and PDA should be merged.  My PDA keeps track of phone numbers, but I need them in my phone too, so I end up with duplicates.  They have a LOT of overlapping duties, and the idea of a single device to handle them all is very appealing.

I know, I know, it runs windows.  I can live with that.  I probably won’t be able to sync with my desktop, but I’ve never been much for syncing on any of the PDAs I’ve owned (Palm, Linux, and soon Windows).

It runs IE of course, but Opera and Minimo will run on it, and there’s a PuTTY implementation for SSH.  As long as I can use a real web browser, and SSH, I’m happy.

It has a miniSD slot, so I can put in up to 2G of space for files, and it has windows media player, so I should be able to play mp3’s at least.  It has MSN IM, which doesn’t thrill me, but I’m hoping for a WM version of something like trillian or gaim.  I’ll need Jabber, it’s becoming a LOT more significant in my buddy list.