The space shuttle has tiles all over the bottom to keep the heat out on re-entry.  Between the tiles is some filler, something to plug the cracks as it were.  Occasionally, some of the filler comes out a bit.  Apparently it happens fairly often, and has never caused a problem. 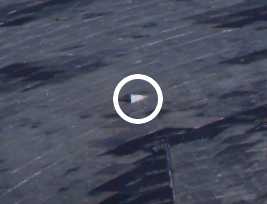 On this flight though, they’re being extra careful, and noticed a little sticking out under the nose.  They decided it was worth doing something about, so today Mission Specialist Steve Robinson is going out to try to either pull it out, or cut it off.

All the pictures I’ve seen of the "damage" have been really grainy and nasty on TV.  Today I looked at the "Astronomy Picture Of The Day", and it was the shuttle, with a great shot of the underside.  They don’t mention the damage, so I’m not sure if they realized they got such a great shot.

If you click here or the image above, you can see my version full size.