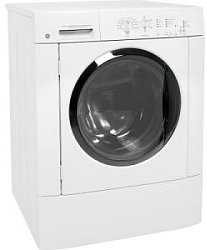 Last week our washing machine made a couple loud clicks, as if there were something metal in the tub. We checked it, and it was working fine, so we left it. A little while later we heard a squeal, and I said “Is that in the basement?” We hustled down there and there was smoke coming out of it. We’d fixed it once before (different symptoms) so we tore it apart, and found that the belt that turns the drum wasn’t going, though the electric motor trying to make it go was spinning. Hence, smoke.

The repair man came and looked at it (charging $75 to tell us it was broken), and said if we could find the receipt then the transmission would be under warranty. Since we didn’t have the receipt, the repair bill would be $400.

In light of that, we went shopping for a new machine. We could have purchased a new machine for less than the repair bill, but we decided to look at something solid. My wife has wanted a front-load washer for a while now, but I didn’t really understand why until we started looking at them.

We ended up getting a GE 3.5 Cu. Ft. King-Size Capacity Front Load Washer from Home Depot. It’s the cheapest of the front-loaders, which made us a little wary, but this review is what made us decide to get it. The reviewer keeps her water bills, and in her first year using the new front loader (the same one we have) she used 11,000 gallons less water than the previous year.

That seems really incredible to me, but apparently all front-loaders use less water than top loaders. The clothes come out a lot drier too, which means we run the dryer about 10 minutes less per load. Over time that’ll add up nicely.

In honor of this new machine, I leave you with a favorite song. I actually saw this rendition performed live in the early 1980’s.

3 thoughts on “The new washer”