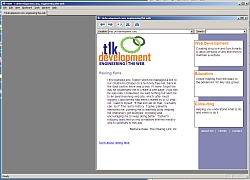 When Apple released their OS X operating system, they released it with a proprietary browser called Safari.  The HTML rendering engine was borrowed from Konqueror, a Linux browser.  Apple created something called WebKit to help developers create other applications with Safari’s functionality.

Until now, if you wanted to check a website in Safari, it required a Mac, or a service which would take a screenshot for you.  Recently however, a group of open source developers have released Swift, a windows based browser using webkit.  Theoretically it would show you what a site would look like in Safari.

It’s 0.1pre at this point, so there are some "issues" (the Tools menu has no items), but it seems to render things exactly the same way Safari does.  And it’s FAST.  Way WAY faster than any browser I’ve ever used at rendering stuff.  My blog is almost instantaneous.

Something else that’s interesting is that it has a multiple document interface, like Opera.  That means you can have several "windows" open inside the application, but they’re kept inside that application.  You can kind of see that in my screenshot.

2 thoughts on “Web Kit For Windows”